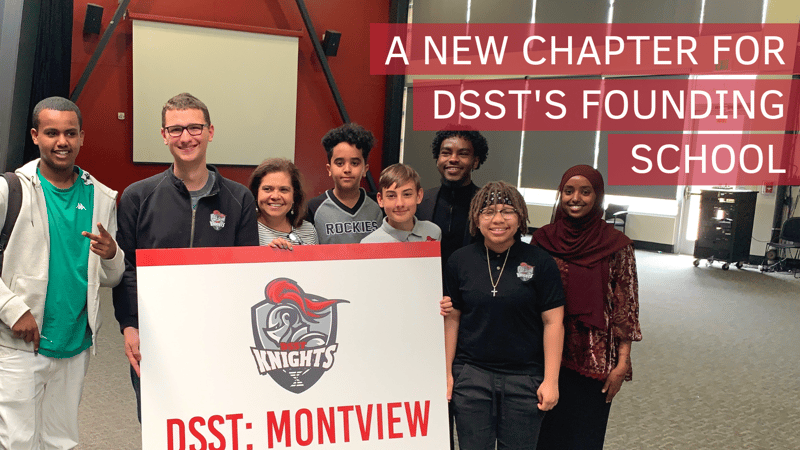 For almost two years now, engaged students at both the middle and high schools have dedicated countless hours and tons of energy to both the idea of changing the name of DSST’s founding school. At the middle school, students were led by Writing teacher PJ Shields, who dedicated extensive class time over two years to work through these changes - both in conversation and through research and writing projects. At the high school, this was done in partnership with Colorado Youth Congress (CYC).

DSST: Stapleton is of course located in the eponymous Denver neighborhood, which in turn was named after Benjamin Stapleton - a controversial mayor in the 1920’s who was a member of the KKK.  When our school was founded in 2004, the name was simply the Denver School of Science and Technology. It was not until DSST opened its second campus, in Green Valley Ranch, that we felt the need to distinguish between the first and second DSST schools. The decision to change the founding campus name emerged as many of our students come to believe that the Stapleton name no longer represents the rich and diverse community our school serves.

From collaborating with their peers, staff members, DSST leadership, and the Stapleton community as a whole, we are proud of the leadership that these students have demonstrated as they embarked on this challenging and valuable work. It all culminated in a very special morning meeting last week, where the school formerly known as DSST: Stapleton announced a new name - DSST: Montview.

The school’s name may have changed, but our core values remain the same. We are proud of our students for having the courage to speak out for what they felt was right, working collaboratively to make a change, and showing deep respect for their community throughout the entire process.

Our students' passion, resilience, and commitment gathered news attention all across Colorado. Check out a full roundup of news articles below and two claps on two for the DSST: Montview Knights!