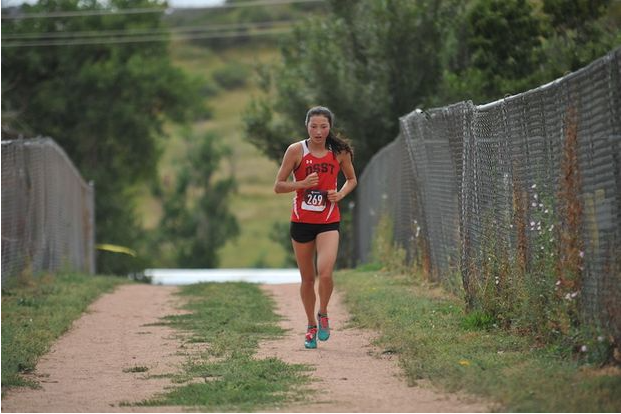 You are the starting line waiting for the gun to go off. There are butterflies in your stomach. All those years of hard work have led to this moment.

The gun fires and you take off. You know your rhythm so you set your pace and let focus and control take over. You have been training for this. As you push toward the end, your body starts to ache but you push through the pain and give it everything you’ve got.

As Montview senior cross country runner Leah Hill crossed the finish line at the State 3A Cross Country Championships in October, she felt a sense of accomplishment.

“There’s just something really satisfying and meaningful about truly working hard for something, and having it come true,” Hill said. “I think that’s what cross country is. There’s no way around it.”

Hill placed third in the state, a feat which took years and years of training, according to both she and her coach, Connor Bohlken. Since she began seriously training, Hill has consistently been running between 35 and 60 miles per week, Bohlken said.

“Her training has been mind-numbingly boring, but that is exactly what it takes to be a good distance runner, and she has stuck with it through the frustration of running on her own for many, many miles,” Bohlken said. “In the winter especially [she runs] all by herself for nearly an hour every day. I know that she wouldn’t have had the same success this year if she hadn’t spent the time over the last two winters training on her own.”

Since the pandemic, it was difficult for Hill to stay motivated, but she continued to show up even when she didn’t feel like it, because she “knew it would be worth it in the end.”

While her coaches attribute the win to Hill’s hard work, Hill credits the coaches at DSST as well as her teammates.

“The coaches at DSST have been incredible. They have been so supportive of me and have all taught me so much within the sport as well as outside of it. When COVID-19 cancelled races, they helped me look for the light at the end of the tunnel, which is an attitude that I will continue to carry with me,” Hill said. “I also could not have done it without my teammates. I had the best teammates who trained with me until state, even after their own seasons were over.”

Bohlken is proud of the work Hill had done and has loved being her coach and teacher. Hill had not been considering running in college, but according to Bohlken, her tone has since changed.

“She is definitely checking out various schools’ running programs, and is considering running depending on where she goes, primarily because of the positivity she experienced being a part of a larger team with her friends,” Bohlken said. “I hope she does, because I know that with her work ethic, consistency and intelligent training she will do well wherever she goes.”
As for Hill, she just wants all students at DSST to know they can do anything, and running is an option for everyone.

“All you need is a pair of shoes.”