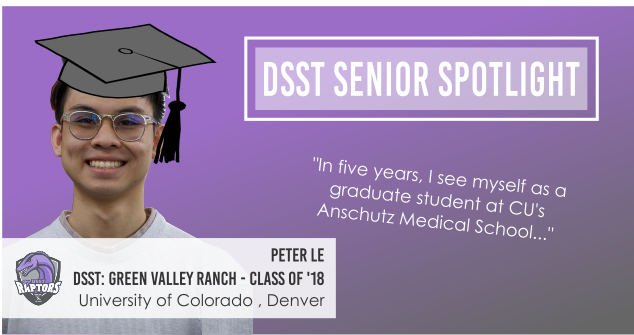 Peter Le is a Senior at DSST: Green Valley Ranch High School. Before he departs on his journey to college, we asked him a few things about his time at DSST and his post-grad plans. Here's what he had to say...

Where are your plans for next year?

"I’ll be going to the University of Colorado Denver next year. I’m on the pre-med track and I’ll be majoring in Biology. I could major in anything, but I chose Biology because I really loved the class in high school and I want to further learn about the word around me. I really love science."

How and why did you end up choosing that path?

"I got accepted into this super cool program called the BA/BS – MD program. I had to go through an application process. After I passed the application part, I had to do two interviews. Initially, I was afraid of the interviews, because it was the first time I had ever done them, but I had practice with Ms. Kalin and other members of the home office, and they said I would do great and so I just trusted their words, and here I am now part of the program! I’m also really excited to be in this program, as it provides a lot for my future."

How has DSST pushed you to grow over the last four years?

"Personally, I’ve always been academically strong, but coming into DSST I was not as strong when it comes to understanding social issues. I think DSST has pushed me to be more socially competent and to work hard to understand different perspectives. I was oblivious to many issues in our nation, but DSST has worked hard to inform and educate its students and current events and how they impact us as a community. Thanks to them I’ve become more aware of social issues within our nation and have become more involved in my community."

Why are you proud of yourself?


"I feel proud of myself, because I don’t regret anything. Senior year I’ve heard a lot of people saying they wished they’ve could done the things they loved, or they regret not putting in 100%. But I can’t say that. I can genuinely say that if I were to go back and do high school over again, I wouldn’t change anything. I got involved in all the things I wanted to do: Track, Cross Country, Theatre, KDance, Student Senate, Prom Committee, ESHIP, Asian Student Alliance, ect. I put 110% in everything I did, and I’ve gain newfound perspectives and skills from all of it. I’ve done everything I could and everything I wanted to for my high school career, and that is what makes me proud."

What's your funniest memory from DSST?

"Darn this is a hard question. There are just too many to count. I always have a giant laugh in my E-SHIP class. It’s never boring in that class."

Where do you see yourself in 5 years?

"In five years, I see myself as a graduate student at CU'sAnschutz Medical Campus. Hopefully I’ve made a great friend group that I can go out with and study with. But I also want to have strengthened my resolve as to why I want to become a doctor, so that I will never waver whenever someone asks me why."