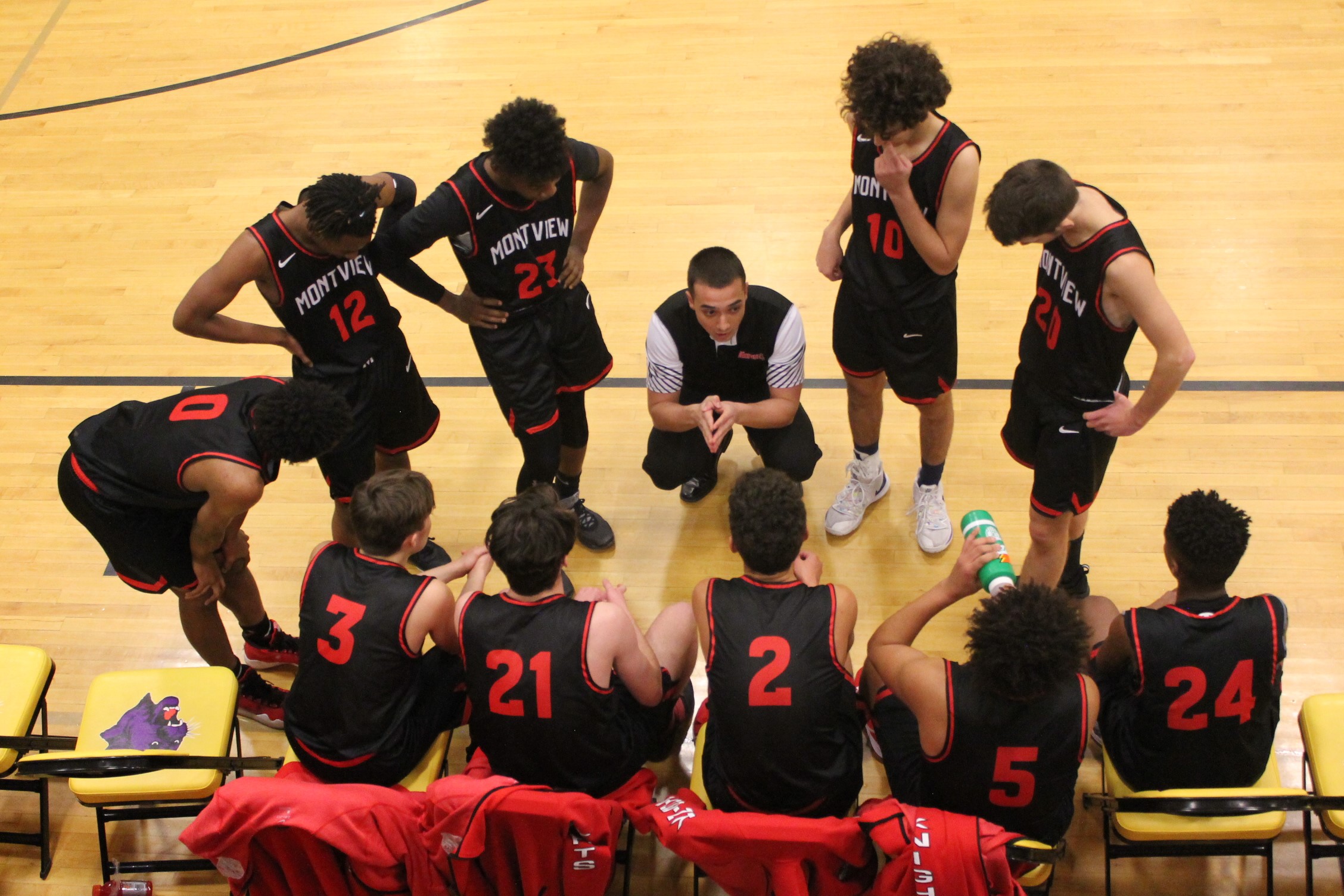 From student to coach: How an unexpected opportunity put 23-year-old Socorro Sandoval in a position to lead a team, make an impact at DSST: MTV

The gym doors shut with a loud thud. Three stray high schoolers sauntered in and gravitated toward the basketballs in the bleachers.

“Hold on a second,” Montview basketball coach and former DSST student, Socorro “Soco” Sandoval said as he gave me a look and quietly got up from his seat. The three boys started dribbling the basketballs across the court, drowning out my next question.

“Hey, I am going to need those balls,” Soco said in a soft but authoritative tone. None of them groaned, rolled their eyes or displayed any sort of teen rebellion as they handed back the balls and left the gym the same way they had come in.

Had that been the only interaction I had with Soco, I would have left with the same (albeit less rounded) impression of what he tries to implement as a DSST coach - respect and relationships.

Soco grew up in Denver. When he was ready for sixth grade, the DSST: Montview Middle School was still new, but his mom had heard good things about the high school so she decided to enroll him.

“She heard about how the high school has a 100% acceptance rate for college, and she just wanted to get me into a good school that would push me academically.”

Despite the challenging academics and the commitment it took to stay on top of grades and homework, Soco was still able to have fun. However, the most impactful thing he got from DSST: Montview were the life-long relationships formed through sports.

It was one of those relationships that landed him as a basketball coach for the school soon after graduating high school in 2016.

“I knew I wanted to coach at some point. I had a really good relationship with my coach, so when I graduated and he found out I was going to college close by, he asked if I would want to stay and coach the C-level team,” Soco said. “He was one of those guys who always believed in me. Even as a coach, he always had that trust and that belief that I knew what I was doing.”

Now, as a sixth-year basketball coach (five as the varsity coach) for DSST: Montview, Soco hopes to have that same impact on his players.

“My favorite thing is having players come back [to visit] and talk about how good they are doing and what they are doing with their lives,” Soco said. “I thought I’d have the most fun actually coaching in the games and practices, but I think the most rewarding thing, for me, is the relationships you build, staying connected to the players even after they graduate and seeing how much they appreciated me as a coach.”

Soco said he stays connected with a lot of the guys, and every Friday before winter break, he reaches out to former players and invites them for an informal scrimmage match, something that has become somewhat of a tradition during his time as a coach.

The heart Soco has for his players is admirable. In the brief time I spent with him, I can undoubtedly tell you Soco brings a gift of patience and kindness to those who come across him on and off the court.

As we prepared to wrap up our time together, I asked him what he would say to students. I expected him to say something like, “just keep working hard” or “never give up,” instead he responded with something that, for a 23-year old, exuded wisdom and knowledge beyond his years.

“Don’t rush it. You see people who have their lives together, who know what they want to do, who are pursuing things and already have jobs by the time they’re 22 or 23. I feel like it is not a typical thing,” Soco said. “A lot of people go through years and years of searching for who they want to be.”

A lot of people just strive to have their lives together, but it’s OK to not have a direction, Soco said.

“It is not something to be afraid of,” Soco said. “It’s OK to not know what you are doing, just as long as you’re doing something that is making you happy and going to keep you going. Your time will come for you to do what you want. You’ll figure that out.”

Soco left me with one final piece of advice for parents who are looking at DSST for their students.

“DSST shapes you into someone who can be successful later in life. When I am going through something that might be tough or I’m kind of stressed out because I have a lot going on, it’s like ‘Well I survived junior year as DSST so I can do anything.’”

Yes, the curriculum is tough, but as a student and now staff member, Soco maintains that DSST is a great school, but what really makes it a standout school are the teachers.

“The teachers here really do care for the students,” Soco said. “The curriculum is tough, but I think that is what makes the teachers more caring and more supportive. And, it helps build those relationships where students want to reach out two or three years after they graduate and talk to their favorite teacher that they had or a teacher who helped them out.”