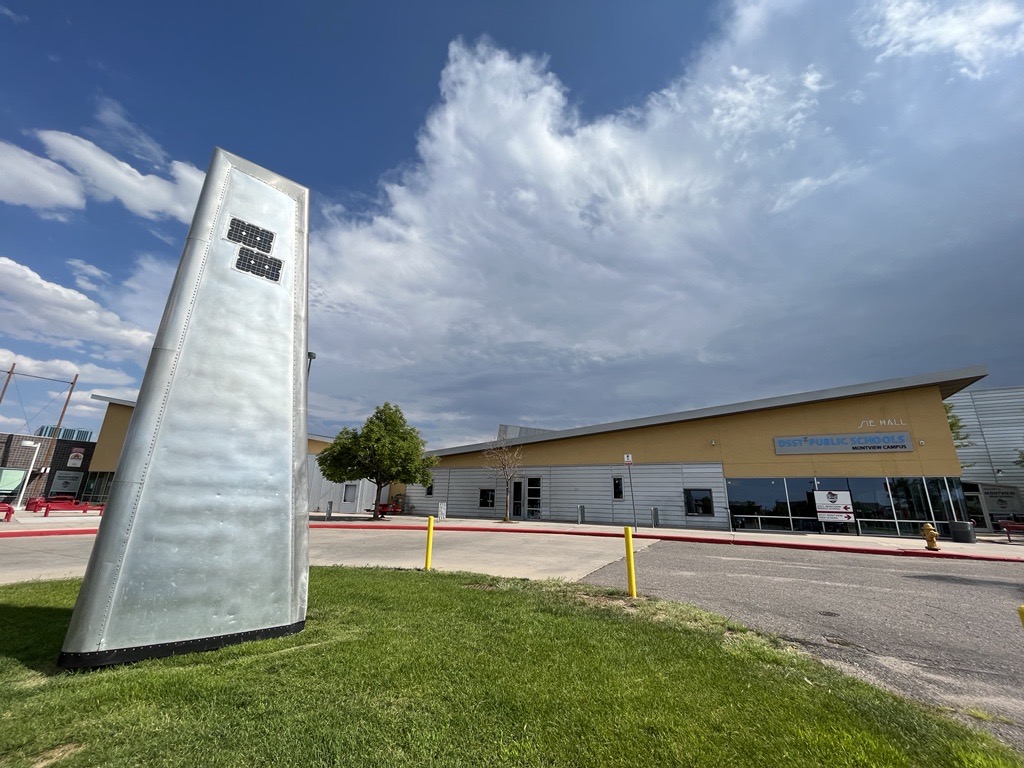 Have you seen the public art installation at DSST: Montview? Here's why you should check it out.

You may have seen a cool art installation in front of DSST: Montview that features a horizontal tail stabilizer from a 737 airplane.

According to Barbara Neal, Public Art Consultant for Central Park, the installation called “Airfoil” was installed in 2007 and is one of four stabilizers that artist Patrick Marold recycled from a junkyard in the Mojave Desert.

Marold is a Colorado artist who was selected as the artist for the project out of 96 artists who applied for the commission.

“The 737 was the plane most often flown in and out of Stapleton International Airport,” Neal said. “(Marold) reconfigured the 16-feet-tall stabilizers into a more graceful leaf shape, adding a solar panel and screen along one side that would glow slightly in the dark. Now called ‘Airfoils,’ the sculptures are slightly kinetic, engineered to move slowly if pushed or with the wind.’

Originally, the plan was to have all four Airfoils the Northfield Towncenter, but according to Neal, as planning moved forward, it became evident that the space would only fit three.

“Instead of searching for another location for the single airfoil, the Park Creek Metropolitan District chose to offer the airfoil for placement at the front entrance of (DSST: Montview),” Neal said. “This sculpture, already a symbol of science and technology through aviation also became a symbol of achievement, the flight that launches students into higher education and careers in science and technology.”

The standalone Airfoil is a slightly different configuration than the other three to make it unique, Neal said.

Apart from identifying the entrance to DSST: Montview high school, the sculpture will make the campus more of a focus to the Central Park community and will also symbolize achievement, which “reminds the community of the importance of this DSST school,” Neal said.

Marold is a Wheat Ridge native and the “Airfoils” were his first permanent public art projects.

He now has other projects at The Denver Zoo, Denver International Airport and the National Western Complex. He also has public art installations in airports in Dallas, Texas and Ft. Lauderdale, Florida and other public sculptures in Alberta, Canada, New Orleans, LA,  and Avon, CO.