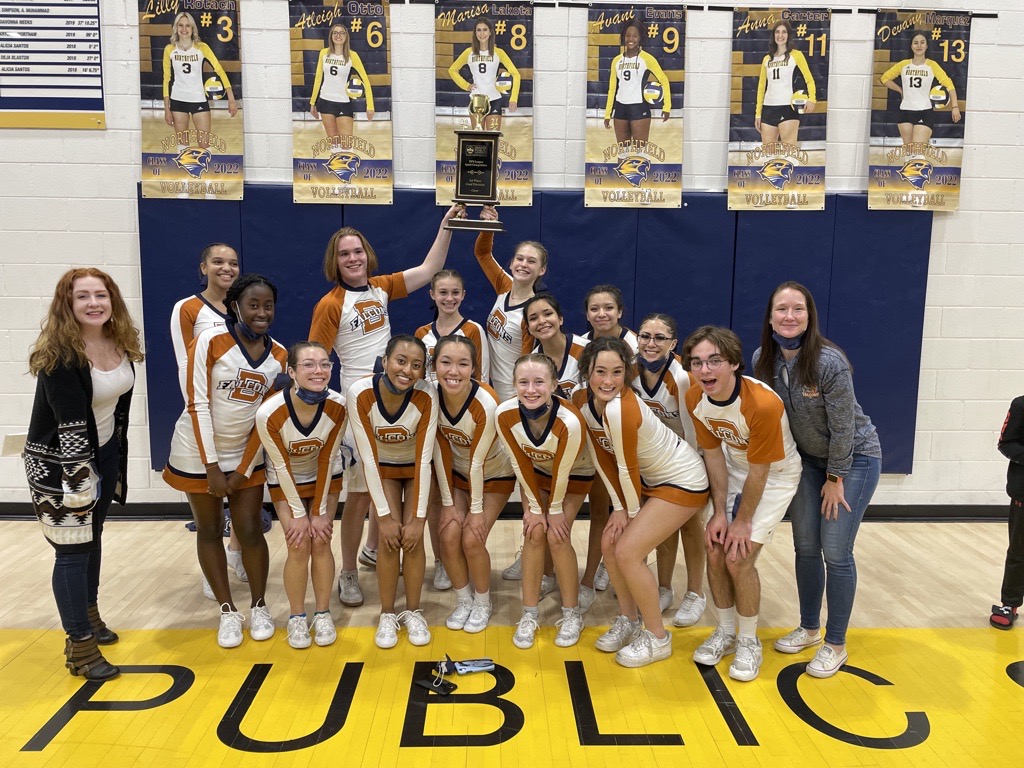 150 seconds. Months of training, conditioning, memorizing choreography, late practices and perfecting technique all boils down to two and a half minutes.

“We knew we had a chance, and we also knew we had done all we could in that moment to make it.”

For those who say cheerleading is not a sport, I would kindly ask you to spend some time with DSST: Byers High School cheer coach, Samantha Barton and her team. The blood, sweat and tears that went into perfecting those two minutes and 30 seconds earned the team a third place ranking at state competition.

That kind of success doesn’t happen in a few short months. The competition season for the Byers cheer teams starts with tryouts in May. There is open gym throughout the entire summer and practices where they work on teambuilding and conditioning in order to build a foundation for stunting.

At the end of summer, the team has 16 hours (broken up over two days) to learn the choreography so when practices get into full swing, it is just about polishing the technique and details.

It takes a lot of hard work to get to where they are, but Barton said this year in particular was “pretty tough.”

“We had a handful of people leave the team, which caused us to constantly change stunting groups, change positions and roles, and rework the routine. We had several injuries and then just dealt with people getting sick toward the end of the season,” Barton said. “Everyone stepped up to roles that they didn’t necessarily want to do, but they knew it was best for the team.”

“Being on a team makes you learn to work not only for yourself but for the whole team,” Michelle said.

“I love how willing people are to try new skills and throw themselves into difficult routines,” said Nadia. “I am inspired by everyone’s work ethic and commitment. I admire their eagerness to push themselves harder and do better.”

The team is young – only 6 years old – and to get to state, let alone place in the top three, they “had to land a perfect routine in preliminaries to get a spot,” Barton said.

Only three teams would be making it to the finals, and there is a lot of time for anxiety to build while they warm up, stretch and practice ahead of their performance, but Barton said the team was ready and never looked better.

“Their prelim performance was the best they ever laid out on the mat. They got a ‘hit zero,’ which in cheer terms means they did not get any deductions,” Barton said. “About 5 to 6 hours later they finally announced the teams going to finals. It’s a tradition for the team to hold hands, close your eyes, and put your head down … We heard “DSST…” and the team immediately was jumping up and down and screaming with excitement.”

It was the team’s third time attending the state competition and each year they had gotten better from ranking twelfth to coming in fourth, so just hearing that they were among the top three finalists was a huge win.

Neither Miranda or Nadia were surprised at the ranking, and both agree that it was well-deserved. Barton agrees with her senior leaders, saying they “hit a perfect routine in finals.”

“We felt honored to have the chance to go to finals, and knew we were with other great teams,” Barton said. “Third place in the state of Colorado is the highest we’ve gotten and we are so proud of that ranking.”